Our very own Molly Montgomery ’15, Zoe Unverferth ’15, and Jeremiah O’Mahony ’15 already landed parts in productions their first semester in college. All members of the class of 2015, each of these recent alums felt that their time at Prep prepared them to dive deeply into their characters under new directors at their schools.

The only freshman in the cast, Molly Montgomery is currently playing the part of Viola in a student-run production of Shakespeare’s Twelfth Night. A play about trickery and identity, Twelfth Night, is one of Molly’s favorite plays.

Molly talks fondly of her time at Prep working with Brad Fairbanks, who she says was open and constantly available to support his student actors. Because of her time at Prep, Molly says, “I really had the space to be thoughtful about what I was doing on stage.” While in high school, she was pushed to think deeply about characters’ motivations, the first moments of scenes, and how to relate to other characters. She now is rehearsing with a student director who expects her actors to come to rehearsal fully knowing their own characters and the meanings of their lines. Molly feels that working with Brad gave her the space and awareness that prepared her for her current director’s expectations. 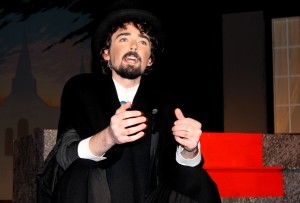 Preparing three different characters has caused Jeremiah to reflect on those he played while on the Prep stage. Jeremiah says, “Prep prepared me to learn more about myself through the characters I am playing.” He adds that in The Mystery of Edwin Drood at Prep, students became deeply involved with the characters, their accents and vocal twitches, their backstories, and their relationships. This introspection allowed Jeremiah to deeply analyze and embrace his characters in his three different productions at Sarah Lawrence.

Now studying acting at Northeastern University, Zoe says that every day she both learns something new in her classes and is reminded of techniques that Brad taught her at Prep. Prep provided Zoe with the foundation to pursue her passion for theater, and she mentions, “All the acting classes I took throughout my years at Prep contributed to a great base layer of knowledge regarding acting and how an actor should approach scenes and monologues.” Like Molly and Jeremiah, Zoe talks of the way Brad taught her to analyze the background of the character she is playing.