The Adesso Archives of the Santa Fe Preparatory School serves as the institutional memory of the school and provides information and support to the Santa Fe Prep community. The Archives collects, preserves and makes accessible the primary source materials of enduring value that document Santa Fe Prep’s history and organization from its beginning in 1961 to the present.

We are proud of the support of the Adesso Archives project at Santa Fe Preparatory School. Already thousands of documents, audiovisual elements, textiles and memorabilia, and other items from our nearly 60-year history have been cataloged and preserved.

Athlete of the Year Award Plaque

Starting in 1969, two athletes (male and female) were chosen as athlete of the year by the Athletic Department.

General and Peggy Elrington brought this 16th-century bell, La Dona de Mexico, from Mexico to Prep in 1972. We now ring it to begin the school year and to celebrate the end of the school year.

This Sisyphus sculpture could be found in Bob Kurth’s office—a metaphor for the way some students may have felt in Bob’s Humanities class.

Over the years Santa Fe Prep has had several signs to welcome students, families, and guests to our campus. This sign for Santa Fe Prep from the mid-1970s hangs in our archives!

General Elrington and Fred Maas (1969-2010 SFP faculty) planted this “broomstick of a tree” in 1976. No one thought it would grow so magnificently.

If you have any pieces in your personal collection that you’d like to donate to us for this project, we will gratefully accept them, and ensure that they are well cared for and properly maintained.

While we are interested in any items that you’d like to donate to the Adesso Archives, we are especially seeking the following:

Any applicable tax documentation and gift acceptance acknowledgments will be provided upon your request. Please contact us at info@sfprep.org 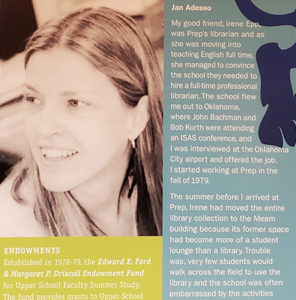 Jan Adesso (above) delivered a “pay-it-forward” capstone gift to the Santa Fe Prep community–past, present, and future–by spending the final two years of her stellar 42-year career establishing the Adesso Archives in a dedicated space on the first floor of the library. Jan has organized all of the board of trustee minutes, founding documents, thousands of photos, stacks of yearbooks and Skirmishers and Griffins, and many other historical artifacts to bring order to the school’s 60-year history. Thank you, Jan!

What a treat it’s been! When I first pitched the idea to former Head of School Jim Leonard, I was concerned with bringing order to the space where we had been dumping materials for the last 14 years.  As I went about organizing and preserving these materials, I found great joy in the many gems I’ve uncovered.

Click here to view one of the first surveys of the Canyon Road property. Praise the work Jeannie Kithil has done with Prep’s athletic history and see one of her many Parkatoons. Check out a few pages from the Christmas book given to the General by his Middle School students. Let’s not forget VLE and dressing up as a favorite author. Maybe you’re interested in seeing a final exam from one of Bob Kurth’s Humanities classes and revel in the fact you once knew this material. Celebrate our first maintenance man Andres Martinez. Does anyone remember Steve Machen’s Spanish class producing their very own fotonovelas? Who can forget the joy of the girls’ state soccer championship in 2005 with coach Rennae Ross at the helm? And so many more.

When we were first thinking of the value and purpose of the Prep Archives, we saw it as an opportunity to collect and tell Prep’s many stories like threads all woven together. I’d say we make quite a colorful tapestry.

Just as important, I am truly impressed with the hard work that went into making a go of this school when so many others have failed. We have much to be proud of. Please know how grateful I am for your contribution to the archives to make it a reality. I am honored to have my name associated with it. Prep is indeed in my heart and in my soul.