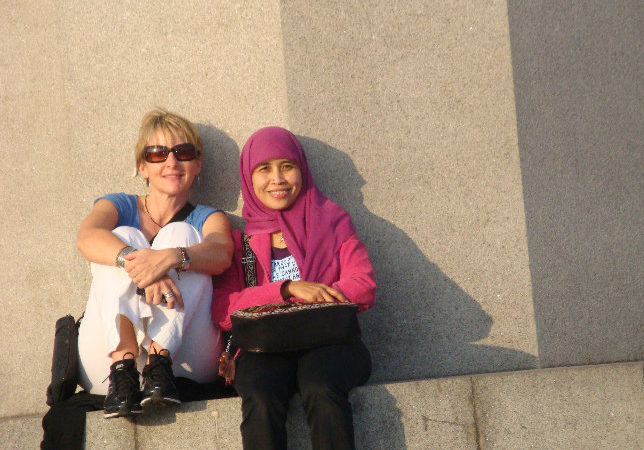 LISA VENEKLASEN ’77 will speak to the Upper School students during assembly on October 20th at 9:45 am to talk about her work around the world for women’s empowerment and human rights—please join us in the auditorium!

Lisa VeneKlasen learned the importance of women’s rights early having grown up in Santa Fe as the only girl in a family with four brothers. All five VeneKlasens graduated from Prep, and Lisa’s experiences in Santa Fe and at Prep planted the seeds for her dedication to global justice. The Spanish program at school, led at the time by Steve and Meredith Machen and Jim McDaniels, was as rich and adventurous as it is now, but their adventures occurred when it was safer for young kids to travel; she and 9 other students took an overland trip which started in a school bus in Santa Fe and traveled through Mexico—stopping along the way at a coffee plantation in Chiapas—before traveling into Guatemala. They stayed with families there right after a devastating earthquake. As a university student, she later learned that this was also during a massacre across Mayan communities accused of trying to overthrow the government (in fact the court case against former General Rios Montt is happening now). The VeneKlasens, and particularly, Lisa’s mother Margaret, were deeply involved in the community, supporting opportunities for kids from low-income families. Her inspirations in Santa Fe—a city with a blend of cultures and histories—catalyzed by her experiences and guidance at Prep, enabled her to feel at home in many different worlds and with a variety of languages, yet with a keen sense of her privilege. Even so, it was a culture shock to Lisa when she went East to Smith College.

Lisa became a social justice activist at Smith. Her student activism there, and later while getting her Master’s in Public Policy at Harvard, connected her to popular educators and movement leaders in Latin America and the US and led her to Nicaragua, where she worked for two years with the Sandinista government’s adult literacy program. She returned to the Unites States and became an organizer with the national Central America Peace Campaign and later served as Legislative Aid for a US Congressional Representative.

Lisa then began to focus on women’s rights in Asia, Africa, Latin America and Eastern Europe. She was with Women, Law and Development International for over five years and lived in Zimbabwe, where she designed and coordinated a 10-country training and networking project that led to the creation of the pan-African Women in Law and Development in Africa (WiLDAF). She also worked closely with dozens of women’s groups in Africa and Eastern Europe to prepare for the UN Women’s Conference in Beijing in 1995. From 1997-2001, she was the Assistant Director of the Global Women in Politics program of the Asia Foundation, where she ran a multi-regional advocacy training and political leadership project. She then founded Just Associates (JASS) in 2002 and is currently their Executive Director.

Lisa also serves on the Reference Group for the International Budget Partnership, on the board of the Bank Information Center, and as an advisor to the Nobel Women’s Initiative.