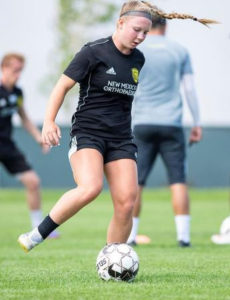 Congratulations to senior Anna Swanson ’21, who has signed a National Letter of Intent to play Division 1 soccer at Wake Forest University, part of the ACC (Atlantic Coast Conference).  Anna played at Prep through 9th grade, where she scored 49 goals in her freshman year. She opted to play with an out-of-state club program prior to her sophomore year. Starting in her junior year, she trained with New Mexico United’s High Performance Player program, and this past year, she played for Phoenix Rising’s ECNL Team (Elite Club’s National League) in Arizona.

Athletic Director Todd Kurth noted how rare it is for any school to have “one of our athletes be recognized and sought after nationally to play division one sports at the highest level. ” He remarked on Anna’s outstanding ability and drive and said, ” She possesses a unique combination of talent, motivation, and composure that allows her to meet, master, and overcome any challenge, and do it with grace.”

Anna’s former Prep coach Stef Coppola added, “Anna Swanson is as complete a competitor as I have known in my nearly forty years of coaching. Whether with herself, an opponent, a move, a score-line, a fitness threshold, or a weakness in her game (there aren’t many), Anna is 100% locked in when it comes to competing. She craves challenges and devours the work required to best them….As driven as Anna is, she has always been the consummate teammate, wanting as much success for her team as she does for herself. Anna will rock it in the ACC, at Wake Forest, and beyond!”

Congratulations, Anna! We can’t wait to follow your game at Wake Forest!